Our Kids Composting page is a kid zone of information and a parents footnote following. 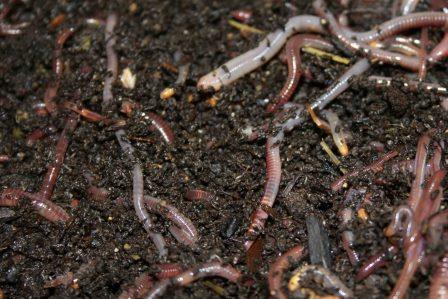 Learning can be fun, especially when you get your hands dirty!

Want to have some fun? We know how you love to get dirty and have fun with bugs and crawly things… like say…. worms.

How would like to grow your own worms at your house?  They are easy to feed and a lot of fun to watch as they work hard at turning your old food into plant food. 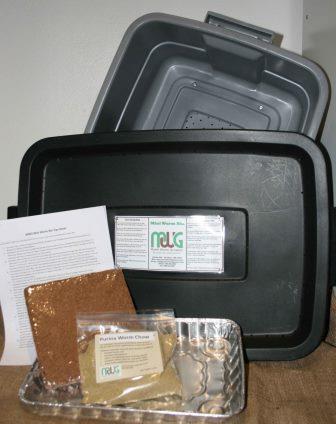 Did you know that worms that live in homes live in composting bins?

We have a small compost bin for your house called the Mini Composting Bin with Worms. It's the perfect size for you to grow your own worms at home.

We also have some Accessory Tools to help you take care of your worms that add to the fun and make it easy! 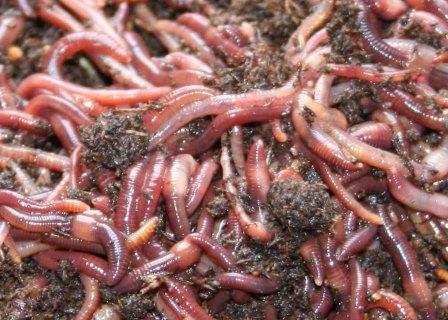 Did you know that composting worms are called Red Wiggler Worms? Sometimes people call them red worms, manure worms, trout worms, tiger worms or blood worms. Their scientific name is Eisenia fetida. They are small worms, growing between 1" and 3" in length and they are very skinny.  Red Worms main goal in life is to eat decomposing organic matter – like your leftover food!  And they eat enough of it to match their own weight in one day, that's a lot of food for such a little creature. 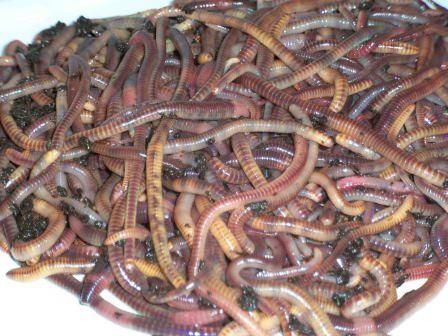 They have a larger cousin that likes to compost as well, its name is the European Night Crawler. Their scientific name is Eisenia hortensis. They grow anywhere from 4" to 7" in length and are as wide as your school pencil.  It's fun to have both worms working in the compost bin. They look so different! 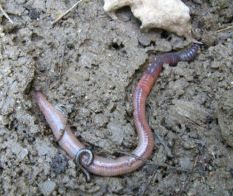 The Canadian Night Crawler is what you see in your yard – they are big, round and long.  These do NOT compost, nope, they are a different type of worm all together. They are "deep dwellers" that aerate (mix up) the soil by making tunnels in it and they need a lot of room to roam both deep and wide. A compost bin is not big enough for them.

Compost worms live more in the leaf litter portion of the yard or garden. This area is where cut grass and fallen tree leaves have landed and are rotting (decomposing).  These worms love this area.  It's called the bedding area.  So in your worm bin, you can create this area by using shredded newspaper and cut up cardboard.

You can also collect fallen leaves and cut grass from your yard to add to the bin to make them feel more at home.  Once you get these materials collected and cut up, have your parents wet it all down with water after reading the Worm Care page.

So now you have your bin, the bedding and which worms you want, you have to feed them, right?

What do worms eat? They eat your leftover food… that's right! They like most of the same healthy food you do which makes it easy to feed them, huh.  They will eat your leftover fruits, vegetables, bread, cereal, rice, oatmeal, noodles and sauce, and so on.  But they

don't like different kinds of meat or milk or eggs or candy bars – they're picky that way.  Remember, they like your leftovers, so eat more fruit and vegetables so you have food for your worms. Have your mom or dad read the food list from the Worm Care page.  Just like you, worms like their food cut up so they can eat it faster.

After your worms have been in their house for a while, you'll notice that there's dark stuff

at the bottom of the bin – that's called "worm cast"  … sometimes people call it "worm poop", but it doesn't smell like poop, it smells like fresh, clean dirt!  This poop is really, really good for plants!  You can't see them, but there are very, very, very tiny micro-organisms in it that help plants grow big and strong.

Worms are good for the soil.  Worms do the dirty work of recycling food waste and other organic materials turning it into a nutrient-rich material that can be reused as fertilizer.

Do you like to grow plants? How about a tomato plant to eat from? Or oregano to cook with? How about marigolds for your yard or deck?  We have a lot of seeds to choose from!

When you've got your seeds, and a cup or small pot, and a little bit of soil – it's time to harvest your worm cast.  Open the bin, gently move the top bedding to the side and dig into the cast, take what you need for your plant.  When you've got it, move the bedding back into place and make sure the worms have enough food before closing the lid.  Mix the cast with your soil, plant the seed, give it a bit of water, put it in near sunlight and wait for it to grow.  How fun!

Do you have to do a school science project this year? Here are some fun ideas:

¤ Organic fertilizer and what lives in it

Worms are good for the soil and for fishing.

At Compost For Kids, there's a couple of games that look like fun.

Here's a bit of biology for those scientific minds.  Worms are Annelids or soft, segmented worms. Here are the different parts of a worm's body:

¤ Brain   Worms have a brain the size of a pinhead where a cluster of nerves control the worm's actions.

¤ Prostomium   Is a small, sensitive pad of flesh that protrudes above a worm's mouth, stretching out to push soil particles out of the way as the worm moves along. But when it finds a food particle, the prostomium pushes the food into the worm's mouth.

¤ Hearts   Worms have 5 hearts that pump blood throughout its body. The blood carries digested food particles to whatever part of the worm's body that needs them.

¤ Exodermis   Worms do not have lungs; they breathe through the surface of their bodies which is call the exodermis.  They need a moist environment which allows oxygen to dissolve on the worm's exodermis, passing into their bloodstream.

¤ Clitellum   Worm are hermaphrodites, which means that each worm has both boy and girl reproductive parts. The clitellum is the light-colored band on the outside of a worm's body. Two worms join together, do their thing and when they separate, the clitellum secretes another substance that hardens and forms a tiny, lemon-shaped egg case, or a cocoon.  Each cocoon contains 2 or more baby worms that will hatch after a few weeks, looking small and clear (transparent).  Environmental factors regulate reproduction with worms, or more food more worms, less food means less worms.

¤ Gizzard   Worms do not have teeth. They have a muscular gizzard which uses small particles of sand and minerals to break down its food for digestion. Undigested matter passes through the intestine as castings.

¤ Intestine   A worm's intestine is a long tube that extends from the gizzard to the anus. Food passes through this tube by peristaltic muscle movement (waves of contraction and relaxation).

¤ Anus   Worm castings are excreted through the anus, which is the end of the intestine.

¤ Red worms may live up to 4.5 years in a composting unit and can grow up to 3" in length

¤ Red worms are hermaphrodites – they are both male and female

¤ Worm poop is the best compost

Let's get the kids involved . . kids love to get dirty and most seem to have a fascination for crawly things, like say … worms. So why not let your kids have and enjoy their own worm composting system as well?

Vermicomposting or worm composting is worms turning our old food into plant food and makes an easy way to engage kids in recycling and their environment, with a little bit of science and nature thrown in.

After all, composting is simply about feeding the worms with organic material so that they can produce worm castings which are good for the plants and the soil.  When done correctly, worm composting doesn't smell and the cast smells like fresh, clean dirt.

As an inexpensive project to share with kids, it's an easy way to demonstrate the recycling process from start to finish:

The worms are fun to watch, they move around a lot and they produce eggs that can actually be seen.  The lessons go beyond the worms. It would teach them some core values such as responsibility and respect for life (ie. taking care of living creatures and having to check on the worms once a day, refilling it with "food").  And as a parent, one of the aspects I like the best is that if something goes wrong, you don't see dead worms, they disintegrate.

Letting your children know that even these small creatures can produce something that can help Mother Nature grow will help them appreciate all the living things in this world. They will also learn to handle things carefully.

It will surprise you how many more fruits and vegetables will be eaten in order to feed the worms the left overs. It's an easy lesson for recycling as well:

If your child is a bit older, it makes for a hands-on easy to understand the "reduce, reuse and recycle"

- reuse an item that you no longer use or want

- recycle items to make new ones

Texas AgriLife Extension Service has a nice pdf containing different types of composting activities to do with kids at home.  Although, the use of composting worms would yield quicker results and can easily be added.

We have some basic information regarding the different styles of worm composting bin and containers on our additional information page, or if you know what you're interested in, you can link over to the Worm Bin and Composters shop tab.

Our worm care sheet is included when worms and bins are ordered, but if you'd like to take a look at how easy it is to manage weekly (taking as little as 15 minutes), it's easy to preview it.

For example, each day when plates are cleared and it's determined what's worm food, chop the food and scrap into a container to save it in until feeding time (or if it's just you doing it, chop and scrap directly into the compost bin). When it's feeding time, pull back a bit of bedding, add food, spray with water bottle, cover with bedding and you're done. It's that easy and quick.

There's also the Accessory Kit that adds to the fun of growing worms.

Red Wiggler Worms are tiny but they do amazing work in nature. They are the champions of breaking down organic materials and returning the nutrients to the soil. Worm cast is very rich in nitrogen, phosphorus, potassium and adds many micronutrients into the soil for all plant types.

Worms are not picky when it comes to food, as they eat many of the same items you do. They especially enjoy vegetable and fruit peelings, grains, coffee grounds and filters, newspaper, and anything else that is organic: egg shells, fallen leaves, tea bags, lawn clippings, expired plants, etc.

Worms do not have teeth! They have a gizzard, similar to birds, that helps them grind small bits of food. Adding ground-up eggshells, oyster shell “flour,” glacial rock dust, or a handful of gritty soil to your bin will help your worms with this process.

Another option is to bring your kids by our worm farm and say "hi", check out the worms and visit the store for supplies!